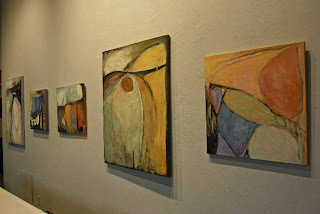 On Thursday Alex piloted our ship, her car, to Castleton State College for our presentation.  Janet took notes for our talk from the front seat.  Kathy and I volunteered ideas from the back seat and we marveled that we left snow country and saw barren ground again west of Killington.  Not too many skiers on the slope.

Above my 5 paintings appear.  The refreshment table sat in front of them, but I was happy to see how unified they appeared.  When it was my turn to speak the words fell from my mouth so similar to my painting experience...starting with a simple line which met with another line to form a dance.  Color filled the forms with emotion and joy and then I pulled myself from the story, bowing slightly to the audience and we moved on to hear the others speak of their work.

The line up...Alex remarked that it was a good line up. 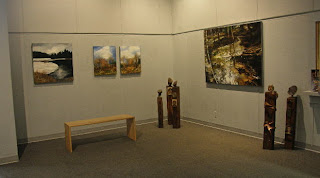 Liz Nelson couldn't be with us as she had a bit of a doctor's visit to deal with.  Janet's sculptures are situated all around the large room. 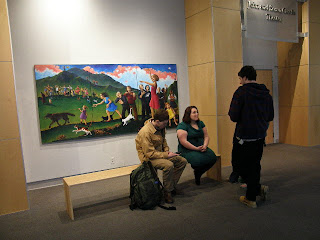 Here we have Ann Young's large painting.  Such a story that one tells on its own.  Ann is in Patagonia. 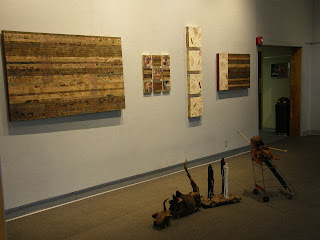 Kathy Stark's wall of excellence....seeing them with this great distance is certainly different than the close viewing I usually want to make with these. 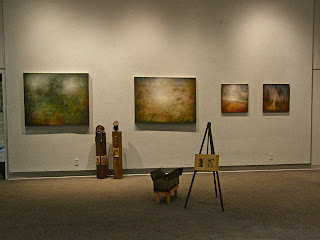 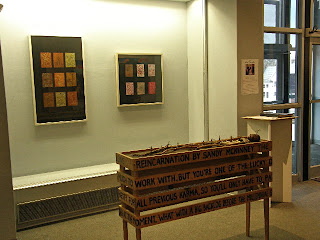 Alex Bottinelli and a poem by Sandy MacKenzie honored by her daughter Janet. 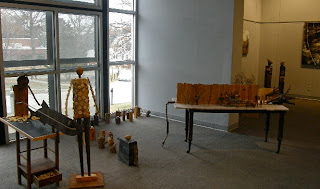 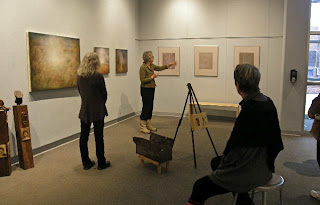 Here Alex speaks of her work, which are modeled after the trails left on the beach by small crawlings. 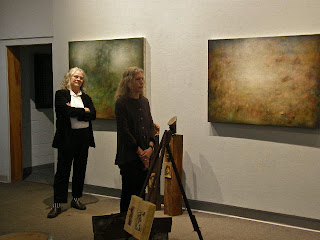 Janet and Cheryl look on while Alex speaks. 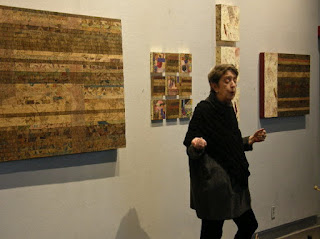 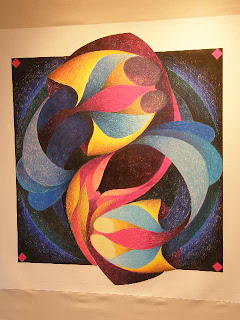 Bill Ramage was our contact with this show; he hung the work and really made it happen.  Since he was having an opening today in a neighboring town, we ventured out to see what art he was showing.
Color and swirls, large, his study in the way of seeing. 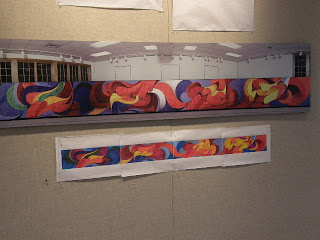 This is a photo of his large piece, 40 feet in length, which did not fit in my camera's eye. 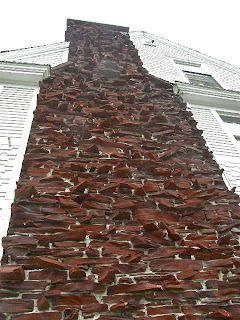 While Kathy bought Bill's book, I saw this fabulous chimney and had to get a few shots of it before we packed into the car for the ride home, feeling quite satisfied that we had accomplished our goals.
Posted by Maggie Neale at 2/03/2012

That's such a wonderful documentation of the events of the day, Maggie. Thank you so much for putting all the pieces together! I wish we had moved the table so you could get shots straight on to your work, but we will do that on pickup day, eh?

your work looks amazing grouped like that - you have such a signature style and it really shows in a grouping - the show looks amazing, congrats! xo

Thanks Jeane, such words of approval from you! yeah! So appreciate your support. Happy art making.

The whole show is a winner! Your five pieces WORK! Your gallery mates have exciting work as well...what a great show...congratulations!

My thanks to you Mary Ann for your kind words and for your visit. yeah, a winner!