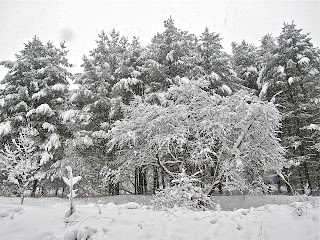 So the snows finally came to Vermont.  Odd how we have been too far north for many of the snow storms in 2010.  Wednesday it snowed all day after a night of snow--16 inches.  Magical to wake up and see the world outside our window so changed. 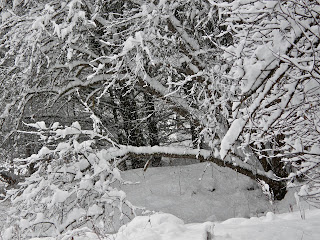 Heavy weight of snow; hard on branches and electrical wires.  Many lost power. 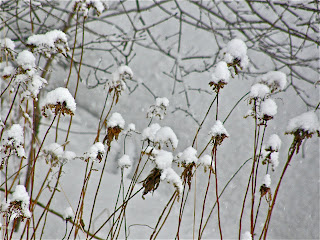 Love the fluffy caps on everything. 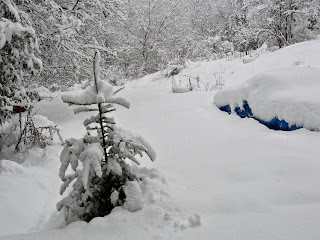 Just off the back deck stands our Solstice tree still giving us pleasure.  The Miata just shows a bit of color.  No deer tracks yet through the snow.  How still it is.


My son, Ezra, working in the forests of Cameroon, Africa, called to say he was recovering from malaria.  I didn't even know he was sick.  He called when he had returned from the field last week and was worried about an infected toe.  His girlfriend was still in the bush on a monkey count and he was feeling sorry that he was there on his own with this hurt foot.  We had a good talk, but soon after the call he realized something more was wrong....he was feverish and went to a neighbor who took him to a French clinic where malaria was diagnosed.  Oh my!  He admitted he had felt fear, and was really sick.  Shannon is out of reach and what could I do to help?  So he waited until he was feeling better and could call and say he was recovering.
And what have I been doing?  Visiting the river, painting scarves, and watching the Olympics.  Well, as my Mama says "He's a grown up and has to make his own way....just like you did." 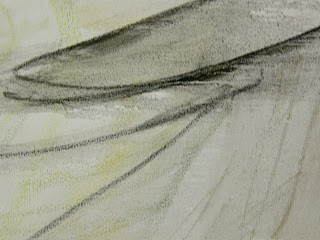 Detail of painting --perhaps the sweep of a snowy hill?  Seems to fit in with the lack of color on this post. 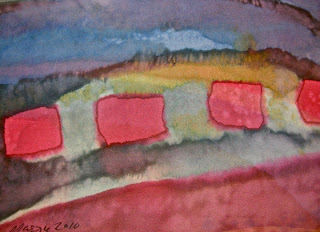 Oh! Color was needed!  I've been doing some silk work playing with some great colors while the world outside became covered with that thick white blanket.  This is a detail of a 11x60 chiffon scarf for our color musing pleasure.  Thanks to you all for checking in.
Posted by Maggie Neale at 2/25/2010

niiiiiiiiiiice images.
beautiful color with your silk work.
and yes, odd how the snowstorms have missed us OFTEN this winter UP NORTH on our chilly parrallel.

Beautiful postcard beautiful snow. Never too late to get you fair dose of snow!
The silk work is also beautiful, love the pink squares.

The snow images are just lovely...wasn't it a beautiful snow!

Changing weather...the magical snow, then the rain all day yesterday, the howling winds last night, and today the sun made me think spring. Got my passport renewal in the mail today...want to be ready to travel if the chance comes up.

Thanks all for your kind words; think I'll paint more silk to celebrate.