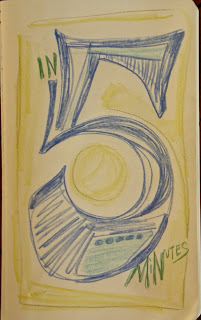 Where have I been?  Retreated into the depths of a head cold which kept its hold on me too long.  My inspiration was indeed impaired also and no writing skills could be found.  I did rise out of the dis ease enough to create a batch of scarves for an order, titled Waves of Change.  I burned the midnight oil for these as the deadline was upon me and since I was waking up each night with a coughing fit, I would sooth the cough with remedies and then paint another layer using the hair dryer if still damp from the previous painting.  Waves of Change came out of the deep dreams, waking and interrupted sleeping but they were so well received...customer so satisfied and grateful, as she put it.  Yeah!

So what is this drawing?  I have entered into the Sketchbook Project which will go on tour in 2011 starting with the Brooklyn Library where my sketchbook has already received its barcode.  It is a Moleskin sketchbook.  I have chosen from a list of titles "In 5 Minutes" and I have been mulling over how to begin for the past month.  While working with a student on Wednesday who was working in her sketchbook, I began mine.  I found the paper very fragile, ripping with the pressure of the colored pencil.  Oh my!  Discouraging beginning.  I don't think it can hold my oil pastel work or my paint; perhaps I will have to glue other papers into it.  I am sure it will evolve, but it is taking me way too long to figure out my path on this "in 5 minutes" project.  If you would like to know more about this project and maybe even get involved www.thesketchbookproject.com
Posted by Maggie Neale at 11/12/2010

The sketchbook project looks like fun. All the best with getting over your cold.

oh, same frustration/procrastination here!!
something not too exciting about that little sketchbook, as i seem uninspired...several begins, and stops...AND A BIG STOP was the paper! i wrote and drew with ink and it all bled through...so slapped some scraps on the other side.
my new theme is centering around SCRAPS!
(and my word verification is tinylyin===could be true)

Hi Neva, you are wondering in the sketchbook land too! Did you set yourself up on the site? I'll go look. I am feeling better about my process with skbk. Scraps are good. I'm thinking in terms of tatters myself. I'll be eager to see what you do with it.