Silks flowing on the streets of Montpelier 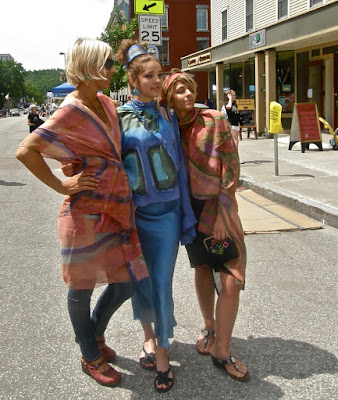 Fashion show day was the morning following a week of grandmother service and workshops, fire, and blessings.  I let go of all the ideas for newly designed outfits and went with what I had already created.  Svetlana on left was visiting her mother who had recently broken her hip.  She has lived for the past 12 years in Playa de Carmen, Mexico and is now a photographer there.  She says fashion shows happen often in her area because they are an inexpensive party.  She was much happier taking the photos than dressing up, but she did create an interesting outfit with the long scarf wrapped at her hips over the jeans. 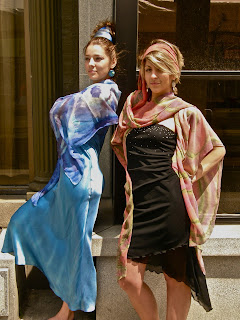 We took Katia and Ann Jo to the streets for a practice before the event started.  Svetlana set them up for some shots.  She has a very expensive camera which has such a quick action it made mine feel like something old and worn out.  I hope she is as good as her word and she emails me some of her images when she settles down in Mexico again. 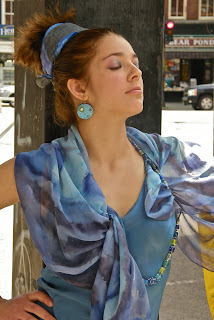 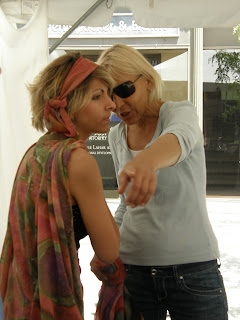 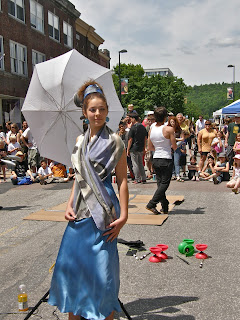 Daring walk by the umbrella set by the show's photographer, Katia is captured with the crowd scene as witnesses.  We were all being bold...costumes and cameras allow boldness. 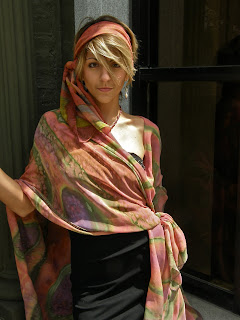 I set this one up while Svetlana was working with Katia...love that dark background. 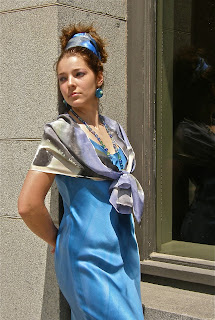 Working with stone, soft against hard.  She wears that blue charmeuse dress well, and the earrings from Jill of sculpy show up fashionably well too. 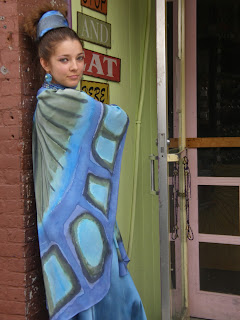 Had to get the sign in the background, and the pink door suits me in this shot. 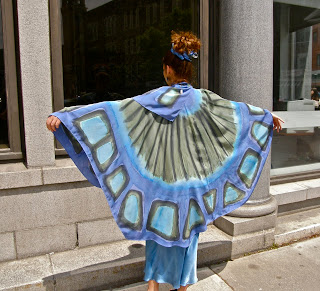 I call this Cape of Flight.  Katia enjoyed playing with the expanse of it. 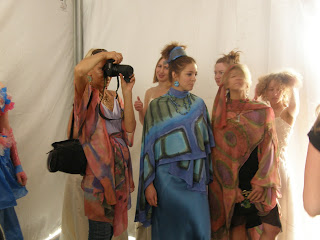 Backstage...Svetlana still a camera sharp, not yet a model. 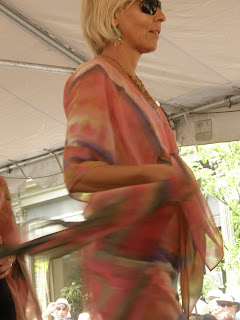 But she made a brave walk, a bit fast, though she kept cautioning the girls to walk slowly. 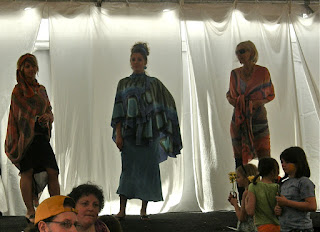 Much applause for these models in my silks with designer jewelry from Artisans Hand.  They made me proud. 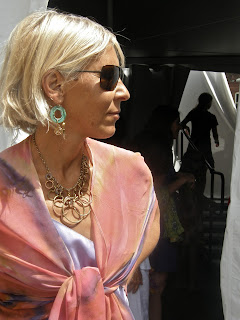 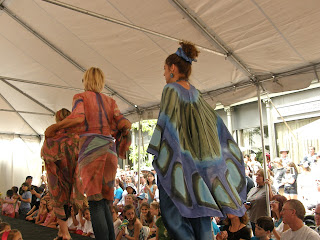 Another fashion show ends; next year maybe I will prepare for it with more time allowance, but pleased we could make the silks flow on State Street in the light of day before the eyes of a crowd.  Good for this maker to see they have some real ambiance and style.  Guess I'll go make some more. (Yes, all these items are available for sale, email or comment for prices.  Some silks available through etsy.com/shop/colormuse)
Posted by Maggie Neale at 6/17/2011

It all looks so beautiful. The Cape of Flight is simply amazing.

What fun - and what gorgeous silks! You must have been so thrilled to see them in the show! Beautiful work!

Thanks Altoon for such a quick response...ah, "simply amazing" gosh!

Hi Judy, it is fun to see the silks move down the aisle. Gives me a boost.

Maggie... what a gorgeous post... a real flight of fantasy... could not wait to see what was coming next...Bravo ....well done you!

I hope you sat and sipped something bubbly at the end of the day and congratulated yourself...

Ah Sophie, you are so sweet! Glad you enjoyed. Actually when it was all over I was too beat to sip.