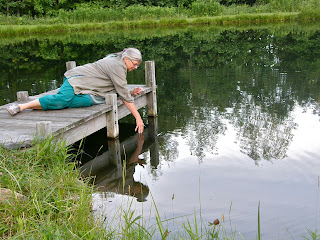 So relieved to have a day for reflections, a quiet morning, breakfast on the upstairs balcony overlooking the back reaches.  This doesn't happen often enough.  Even now I have some sense of rush to finish these thoughts before the next task, but relax, Maggie.  Look into the waters of these past days and collect some of your thoughts here.

We bought berries to plant, just twigs with roots.  Really there was no hope of berries this year.  Then the deer made their raid and there was less hope.  Bruce put up scarecrows and sent me up to see if perhaps the bush near by was elderberry....no such luck, but then I noticed a blackberry bush, I had not seen before bearing berries, such a perfect rich darkness.  delectable!  This morning the bush seemed shrunk as I approached it, but as I drew closer I saw it was the weight of the berries which held it down.

The watercress is coming into another yield after its flowering and the peppermint or chocolate mint, as 2 different people have called it is spreading fabulously.  I live in a wonderland all my own and so often I am too busy to enjoy it.  Why is that?  Oh, that's right looking for the funds to keep the bills paid and collectors from my door.  Alas!  Like so many people I know.

Yesterday I did a local arts festival.  It was a beastly hot day, not one I would spend at an arts festival, but I had paid my fee and I have been trained to not disappoint others by not showing up.  We took our new Caravan 10x10 which i had ordered in March but didn't open til 10 days ago to find that it had some breakage in its plastic sliders.  New ones on the way...coming Monday! says the company.  We glued, wired and made blessings to the gods, and were rewarded.  our neighbors had a Caravan and coached us on the put up with skill.  People came and many folks admiring said they had many of my silks and were happy to meet the maker, but it was not a day for sales until at the very end when several exchanges happened, including the sale of a painting , Stone's Breath, 2000, acrylic, that I was happy to see find a new home where it could make new relationships. 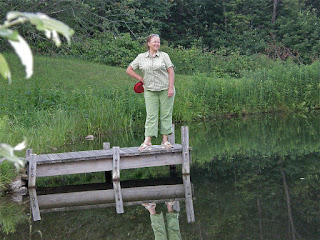 The first photo was taken by Sofia, who still carries her Ukrainian self in high regard, and gives me such pleasure as she shares her Ukrainian ways.  She is a delight.  We were attending Helen's 16th birthday party.  When Helen was 46, she considered herself to be at the midpoint of her life and she decided to start over...when she celebrated her birthday the next year, it was her 1st birthday.  She also is a delight. 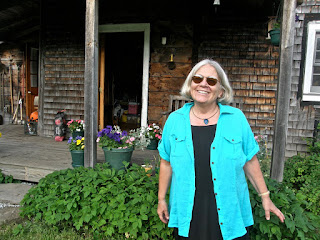 Doesn't she have a 16 year old smile? 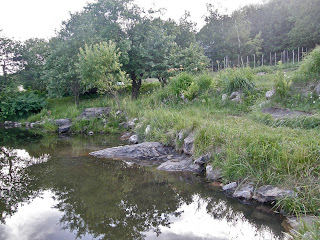 Such a beautiful farm way up in the hills of Vermont on a road surely unpassable on some winter days. 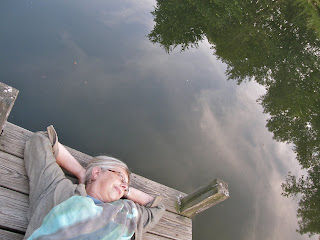 I took a small reflection lay on the dock that day, captured by Sofia in her original way. 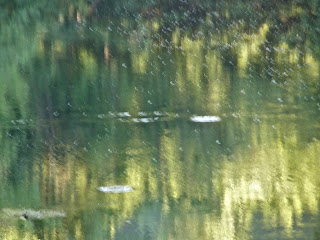 Under the bridge, Montpelier 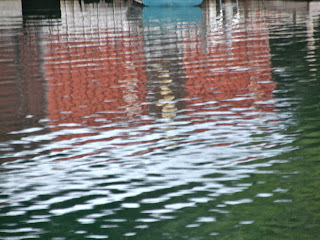 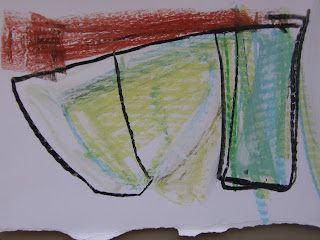 the reflections in my art of some of the inner spaces of myself.
Be well friends, family, and followers.
Posted by Maggie Neale at 7/18/2010

What a trooper...hot day art festival with equipment failure but the save...end of day sales...makes it all sweet somehow! Great photos and descriptions of your time spent with friends and nature and natures bounty...I can tell...you are enjoying your summer!

Hello Mary Ann, yes, I am making the most of these long summer days. Was swept off to Bread and Puppet this afternoon. This is a tale unto its self awaiting more another day.

Hi!
First, thank you for the kind compliment left as a comment on my blog. Your northern world looks so wonderful and I'm glad that you do find time to enjoy it. Too many people I know, too, don't stop to appreciate their surrounding beauty. Love your paintings, the inspiration from nature, and your words of friendship. Congratulations on a successful festival. Thanks so much for sharing!
Susan
(in very, very hot South Carolina where the temperature will hit the century mark again today the the heat index will flutter around 114)

Hello Susan, thank you for coming for a visit here. Oh! So hot! Do you submerge yourself in cooling waters? Intrigued with you mention of sewing chiffon. I'll look more.