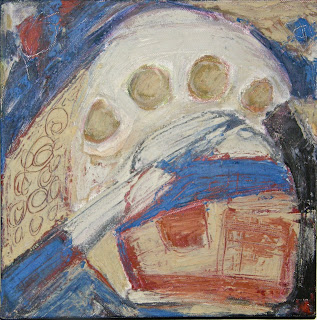 This week has been a juggling act. Between clerking at the gallery, setting up the sale which started on Friday, and getting the cards out to promote the event which has been very successful for 31 years. But this year with thoughts on Haiti, the banks, and the recession, it feels like pushing against the river. And that river is flowing again as January warms once again in the north country. We took a walk along the river and I captured some images which are still within the camera...maybe tomorrow. After the walk I went over to Cully's house to see if I could lighten her load of art supplies. She is moving to Portland, oregon, the house sold within a couple of months,and now she needs to divest. I have a couple of LARGE canvases, a great stack of papers including yupo, a rolling table, a folding easel, gesso, and turpenoid. Oh! and a bag of rags. What a gift! Thank you, Cully! So glad I could help you lighten your load....but now mine is heavier.
Yes, heavier in duties too, as part of the juggling act. Mama has packed her bags and attempted to leave the nursing home. "If I stay any longer, then I will lose my mind" Unfortunately she already has on many levels. I talked her down over the phone, but she was still drugged later that day and then my brother came to take her to his house for a short visit. She was too drugged to enjoy it and was brought back soon. Oh, she was so disappointed when she saw where she was brought back. Martha and I have been working out the details to move her to Tucson and be on Martha's turf for a while. There is a homey Alzheimer's unit near the hospital where Martha works. We've got the go ahead to move her, just need to get the plane tickets. Sounds simple. Ha! I'm point person on the moving task and it has taken the better part of my mind this week. Yes, juggling.
This painting was almost finished this week 12x12x1.5 and is a juggling act in itself.
Posted by Maggie Neale at 1/24/2010

mmmmm, I see all the balls you're juggling and a bandage wrapped around a house - wonderful painting - a walk must have been a treat - my wax is looking very good - am going to try some tomorrow :)

oh my, juggling indeed, and with some very heavy, serious balls. But then there's painting, and the wonderful painting items you received from your friend: joys amidst the difficulties.

Yes, joys among the difficulties, so true! After I jump this next mama huddle, I think I will feel more comfortable. Thanks for your words and knowing you are around.

Sounds like you are juggling hand and heart. Impossible to stay calm until as you say...jump this next mama hurdle. I wish you well.
Strong piece here...I see the movement of the shapes!